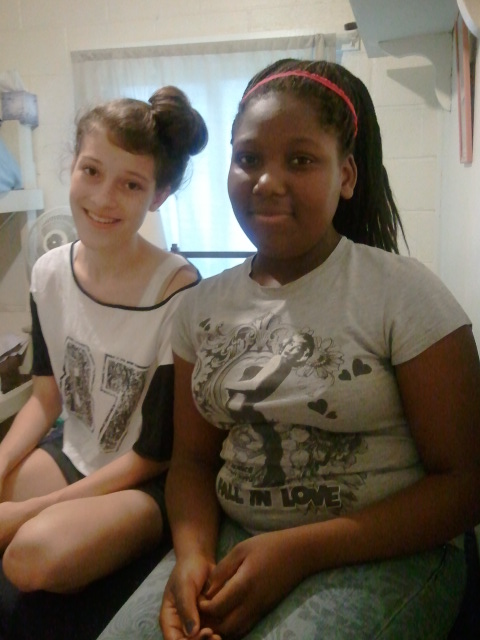 It was a beautiful, cool morning for working on the farm. A Koinonia intern led us into the blueberry bushes, where we worked for an hour with a total of 37.3 pounds of blueberries picked. (No report on how many pounds were eaten.) With the challenges of farm work fresh in our minds, we headed back inside for an activity to consider the human right to work and get paid fairly.

Campers were split into five groups: farm worker, farm owner, exporter, importer, and supermarket. We thought about a $1.80 bunch of bananas at the grocery store and considered how much of that price each group deserved to receive. When combined, the money each group felt they needed for their job was well over $1.80, so a heated debate ensued to figure out how to split the $1.80 fairly. All the groups were hollering about why they needed to get paid more until finally the numbers were negotiated down. The real numbers were revealed, and campers reflected on the low payment to workers.

After lunch we visited Cafe Campesino, a fair trade coffee shop and roastery in town, where we enjoyed delicious drinks and a tour through the facility. Peacebuilders Camp Advisory Board member Nema Ethridge led the tour and explained how fair trade cooperatives cut out the middlemen and work directly with farmers and farm workers to make sure they’re paid fairly.

As today’s activities have kept food systems at the front of my mind, I’m more and more grateful for the innovations in agriculture Koinonia Farm is exploring and the tasty food they serve at our meals together. The cooks have worked hard to serve kid-friendly food this week to nourish campers hungry from so many activities. You’d think the campers would be tired as well, but as I write I keep hopping up to remind them it’s past lights out…

The Peacebuilders tree is complete!

“Thanks for everything. You taught me so much. Your hospitality, kindness, and accepting helped me realize that there is hope for the world after all."
-Trevyn, 2014 camper

“I loved, loved Peacebuilders Camp! It is such a great camp for teens, it helped me a lot, I learned so many things and I am hoping to come back next year.” -Farzana, 2016 camper

"Thank you for another wonderful experience. Faith has not stopped talking about her week! We love hearing about her week and the new friends she made. You are making such a dynamic impact on our world! We cannot thank all of you enough!!"
- Kathy O’Hara-Rosa, parent