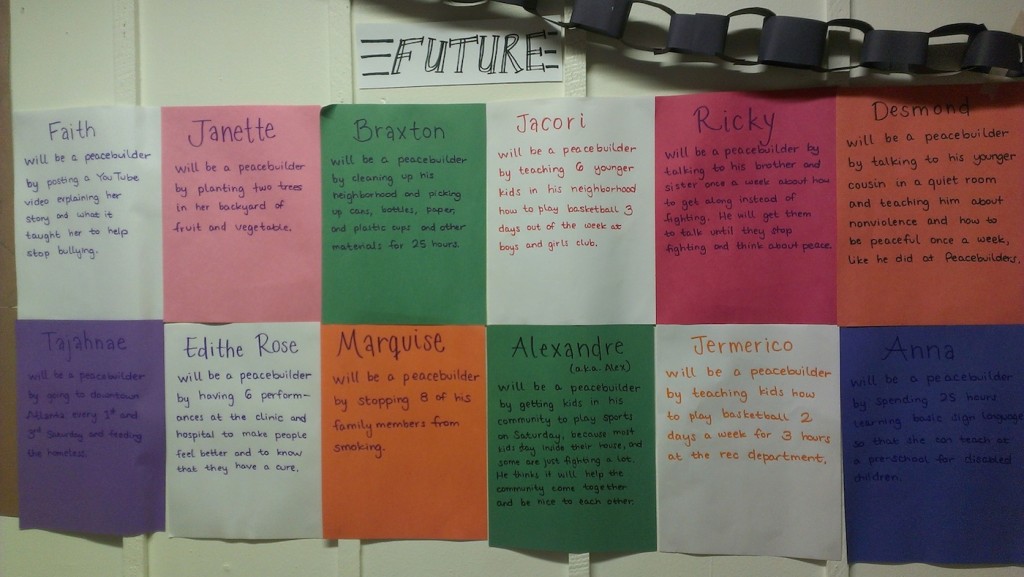 Our final day with this group has come and gone. We’ve seen friendships grow up between campers during the week, and it was sad to see them part ways. It’s also hard not knowing if I’ll hear from some of these teens again in the future. I know the whole staff will be wondering how they use what they’ve learned.

This morning we slept in a little later since last night was “late night lights out” night. Then we had our teens write up some advice for the younger campers coming in next week. Answers ranged from “Drink a lot of water and take cold showers” to “Take notes, be nice and be social.”

We did an activity to review the articles from the UDHR we covered this week and had campers in small groups teach back to the larger group what each article was all about.

We continued our conversation about peace through justice and encouraged campers to think about what gifts and talents they could use to make their communities more just. We had the campers make compliment capes to help name gifts in one another. (Compliment capes are when everyone tapes a paper to their backs and walks around the room writing a gift they’ve seen in each person on their paper.) Campers all took their papers off their backs at the same time and reflected on which gifts were surprising and which they already knew.

Finally, it was time for campers to become Peacebuilders graduates and make a commitment to build peace in their communities after they go home. We had a discussion about goal setting and helped campers craft realistic, specific goals they could work on in the next six months. They wrote about the goals in letters to their future selves we’ll mail in 6 months, and we also put their goals on paper and added them to our wall of peacebuilders we’ve been growing all week.

The Koinonia community wished campers well at our final lunch with this group, and we spent the afternoon packing up and seeing campers off. As the numbers gradually dwindled, we swapped stories of things we’d heard campers say, talked about their goals, and reflected on the sparks of understanding that had started to come through–our glimmers of hope for future peacebuilders.

Who are the 2014 Peacebuilders?