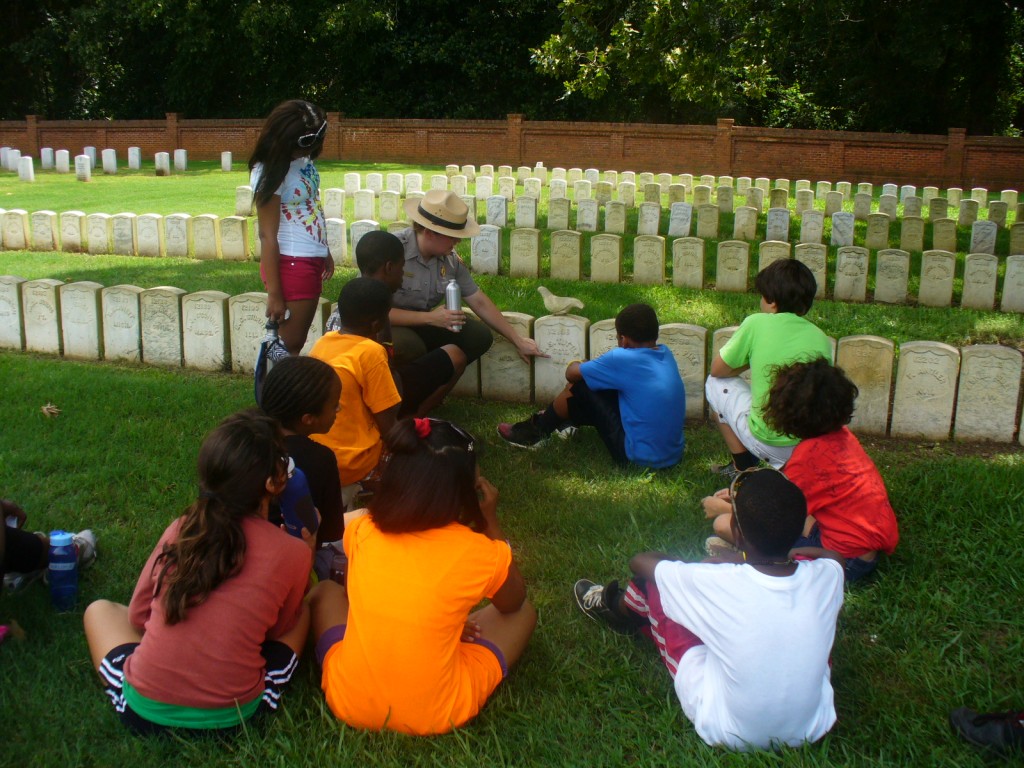 Today campers focused on the freedom of thought, conscience, and religion. We paid a visit to Andersonville National Historic Site, which was the site of a terrible open field prison during the Civil War. During that time both sides of the war would swap POWs…until the Union started allowing black men to serve as soldiers. Then all exchanges stopped as the Confederate side would not swap a black man for a white man, and the result was a sudden explosion in the POW population on both sides. In the South, large fields served as prisons, while the industrialized North used empty warehouses and the like. We learned that even the base of the Statue of Liberty was once used as a prison!

We went on a scavenger hunt to learn about the different parts of the prison field, and then we went to the National Cemetery for our tour. Different states have built monuments in the cemetery to remember those from their state who died, and we learned that the ground around each monument is actually a part of that state. So we traveled to Wisconsin, New York, Pennsylvania, and others as we walked around. We learned about the high cost of war and the suffering it causes, but we also learned about people who choose to build peace in the midst of that suffering. A big shout out to Park Ranger Stephanie Steinhorst who gave us an incredible customized tour.

Back at the farm, we continued to reflect on how people’s conscience can lead them in very different directions with the same goal of building peace. We had campers write down 5 things their conscience tells them not to do. We made a long list of everyone’s answers and took the top 5 as examples–hurting anyone, killing, stealing, being unfair, and being disrespectful. One side of the room became “OK” and the other “Not OK.” With each action campers had to go to the side of the room (or the middle) according to whether or not they thought it was OK to do that action. Then we gave specific examples (a hungry person stealing $5 from a rich person) and talked about how our positions change on the spectrum.

Later we got a special visit from current Koinonia community member Tim Clement who told us the story of how he got conscientious objector status during the Vietnam War when both his conscience and religion told him it was wrong to go to war. He was denied several times and investigated by the government during the process. The FBI even interviewed his kindergarten teacher!

During supper, we got to talk with more Koinonia community members as campers were given a list of questions that required them to meet folks in the dining hall. “Find someone whose conscience or religion tells them what to eat or not eat,”…“what to wear or not wear,”…“how to travel,”… “to do something that resulted in going to jail,” etc. Campers had great conversations and got to learn about how conscience leads in different directions. We ended our hang out time with Koinonians over blueberry cake and ice cream.

Day Two: Who are the Peacemakers you know?

Preparing for our next group of world-changers!