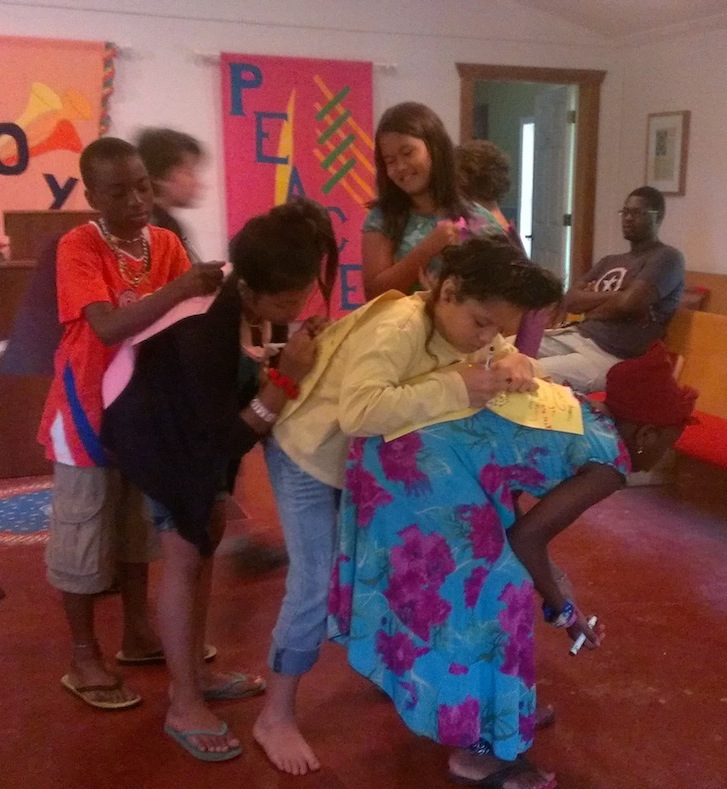 The last day of camp is always bittersweet. Today was especially hectic, though, because those bittersweet closing activities were quickly followed by a whirlwind of cleaning up and packing. For our small camp, the close of the second session means the end of 2013’s Peacebuilders Camp and the end of my summertime on the farm.

The day’s group time began with a review of the articles from the UN Declaration of Human Rights that we had covered this week. Campers broke into small groups and taught back to the rest of the group. Then we again reviewed stories of peacebuilders we’d heard about or met during the week and how they’re all working for peace in different ways based upon their talents, interests, and gifts. To help campers identify their own talents to make a difference, we did a gift naming activity called “compliment capes” in which campers name gifts in one another by writing on a paper cape on each person’s back. Every superhero needs to know their superpower! Once each camper had read the gifts the group had named and reflected on what was surprising and what they already knew, we transitioned into our end-of-the-week goal setting activity.

First we explained that setting a goal is a really exciting, sacred thing to do. It’s the beginning of a journey. We instructed campers to set a goal that could be reached within 6 months, and we explained that a goal must be very specific so you know whether or not you reached it. We broke the room up into stations. Campers really had to put on their thinking caps to figure out a goal that used their own talent to make their neighborood, school, or community more just or fair. Next, each camper discussed their plan with a counselor and wrote it down. Finally, campers headed to the last station where they wrote letters to their future selves and sealed them in an envelope along with the goal. (Letters will be mailed home in 6 months!)

We conducted our closing ceremony back in the dining hall where our “Bridge to Peace through Justice” had been under construction all week. The past and present sections were filled with peacebuilders whose stories had prompted campers to add them to the wall each night during closing circle. To fill in the future section, each camper came forward, read their goal, and added it to the wall. Campers’ goals included things like doing a presentation on poverty at the local community center, raising awareness about fair trade by tabling at an event, making art about peace to share with others, and writing letters to inmates awaiting deportation. One camper was so surprised to learn that “rest and leisure” is a human right that she decided to clean the house once a week so her mother can sit down when she gets home from work.

During the ceremony I was thinking about how proud we are of our Peacebuilders Camp graduates. I can’t wait to hear about their peacebuilding activities in their home communities. I was also remembering our shared meals with Koinonia this week. Koinoina Farm is an intentional Christian community, and each day after lunch they normally have devotion with prayer and Scripture reading. During Peacebuilders Camp, however, Koinonia added to our learning experience and respected the many faith traditions represented by our diverse group of campers by reading a prayer for peace from a different religion every day. As our young graduates prepare to apply what they’ve learned back home they represent many prayers for peace.

After lunch campers dispersed to cleanup crews, packing, and making thank you cards for Koinonians and other facilitators and field trip sites who hosted us this week. It is quite a challenge to clean a house that’s been full of campers for 2 weeks, but Peacebuilders’ amazing counselors were up to the task of corralling and supervising. Some things are asking too much though, and many lonesome socks were left unclaimed.

Tearful goodbyes ensued as the first parents arrived. Many campers were picked up at the farm; others boarded the van to get shuttled back to Atlanta where parents would pick up campers for the rest of the drive home to metro Atlanta, north Georgia, and Tennessee. We thought our adventure was ending, but the adventure for Marilyn and me was just beginning. An hour outside of Americus the van broke down. Jubilant campers enjoyed an extra half a day together. Parents of one of our counselors had driven to the farm to buy Koinonia food to take home, and these heroic volunteers offered to shuttle campers home. Due to our location and the logistics involved, a before-suppertime-on-Saturday drop off became a wee-hours-of-Sunday-morning drop off. We are so grateful for the volunteers who stepped in to help and for the patience and understanding of campers’ families. Moments like that really drive home how committed people are to Peacebuilders Camp and what it does.

Back in the city, I’ve had time to rest and reflect on this summer’s camp and am constantly reminded of the importance of educating the next generation. We may not find out what choices our graduates make in the future, but we can put the tools in their hands to make choices for peace and justice.

Exercise your Right to Rest & Leisure!