Staff training weekend continued on Sunday with house preparations, lots of brainstorming, planning lessons, and learning about our incoming campers. We reviewed the week’s schedule with Curriculum Director and co-founder Marilyn McGinnis, who has built the camp curriculum around the Universal Declaration of Human Rights. (This year we’re focusing on Articles 7, 23, 24, 25, and 27.) Much of today was also spent getting to know our home and hosts, Koinonia Farm — the setting for the adventure that will unfold this week. 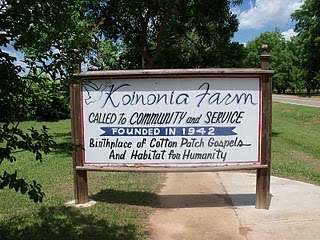 There’s a reason Peacebuilders Camp decided to become an official program of Koinonia Farm in fall of 2012 after two summers of running camp on the farm. Being at Koinonia (pronounced like coin-uh-KNEE-uh) is an integral part of what Peacebuilders Camp is. To understand the camp experience, you’ve got to know a little background about this place. On Sunday, counselors and CITs shared a meal with community members, learned about daily life and customs here on the farm, and watched Briars in the Cotton Patch, a documentary telling the story of the Koinonia Farm community.

Koinonia is a Christian community that started in 1942 during a time when black and white people in south Georgia did not work side by side making the same wage or sit side by side at the same supper table. One of the founders, Clarence Jordan, was a farmer, minister, Greek scholar, and prolific writer, and the early community was an experiment in many ways — social, political, religious, agricultural. The community grew and was involved in lots of ministries and projects, even outside of the busy schedule of running a farm, raising families, and going through the day-to-day of living in religious community.

During the Civil Rights Movement of the 50s and 60s, people in the area tried to scare the community away with shootings, KKK rallies, threats, damage, and other forms of violence and intimidation. When locals began a boycott of Koinonia’s produce, the farm survived by starting a mail order pecan business with the slogan, “Help us ship the nuts out of Georgia!” The bakery business is still one of the farm’s primary sources of revenue, and the main campus where Peacebuilders Camp takes place is surrounded still by beautiful pecan orchards. (The orchards can be seen here in a video describing Koinonia’s recent transition to biological farming methods.)

The staff also learned today about post-Civil Rights history. Koinonia has been the starting ground for lots of big visions and innovative ideas. In the next few decades, after Millard Fuller joined the community, Koinonia ran a local partnership housing program which eventually became Habitat for Humanity, an international housing organization. Many other communities have their roots at Koinonia — Jubilee Partners, New Hope House, the Fuller Center for Housing, and more. Who knows what seeds will be sown in our campers’ minds this week, and what amazing projects in the future will trace their roots back to this transformative experience? As we go through the week, we keep in mind all who have come before us.

Today Koinonia is still an intentional Christian community working to be an experiment in so many ways — to live as a house church, serving others through their efforts to “Feed the Hungry,” by seeking to demonstrate sustainable farming practices, to offer Christian discipleship opportunities, to provide hospitality, and to work toward peace and justice in the world. We couldn’t ask for better role models for our campers than the Koinonia community members they will be meeting and sharing meals with all week.

The story of Koinonia is the undercurrent of the camp experience. As we learn each day about human rights, go on field trips, and have discussions, we’re surrounded by peace work and radical commitment to justice. The pecan orchards that surround us are no longer just trees in the background. They’re a piece of history that beckons us to plant our own seeds.

Peacemaking Around the World