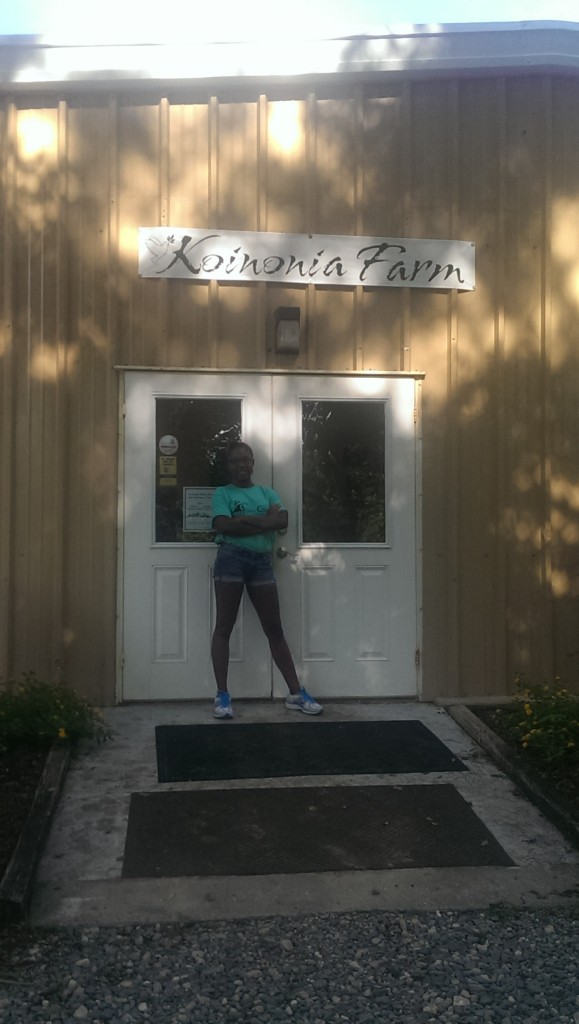 Do you remember when you got dropped off for camp the first time? It’s scary! New people, new routines, and maybe the first time you were away from your parents. I got to spend the first two days of camp with our group of 11-12 year olds, and I’ve been amazed out how open to new experiences and quick to make friends this group of kids are. No one knew each other before coming to camp and they were already talking like old friends when I left on Tuesday.

Monday was a fun and full day at camp. Our theme was “All are equal under the law” and included talking about the Civil Rights Movement and Koinonia Farm’s role in it. We played “get-to-know-you” games, ate with the Koinonia community, created our Camp Covenant, took a tour of Koinonia, played card games and connect-four, went on a hay ride and had a fire circle with drumming and storytelling.

The storytelling is the part I’m going to tell you about in this blog post. As a professional storyteller, I usually tell folks tales to school groups. But at Peacebuilders Camp I try to find the stories of activists who may not be as famous as Martin Luther King or Rosa Parks. As we were sitting around the bonfire, an interracial group of pre-teen campers and adults from the Koinonia community, I told the story of Elizabeth Eckford and Hazel Bryan, the two teenagers featured in the famous photograph from the Little Rock Central integration crisis of 1957. What was that day like for Elizabeth and what was it like for Hazel? Then I shared about both women’s experiences as they grew older, when they finally met and how they forged a friendship. They even appeared on Oprah together! And yet they aren’t in communication with each other today. But undeniably, the experience shaped both of their lives hugely. Read a little more about their story here.

Then I told a story from my own life about how I used to play basketball all the time when I was in high school, often as the only white person on the court. But as I grew older an insidious and subconscious racist took root in me and I started being afraid to walk onto a basketball court if I was the only white person. I entirely stopped going to the park to play ball. I lost all confidence that the black guys on the court would accept me even though they had my whole childhood. I looked around me and found that my once diverse group of friends now consisted almost universally of white faces.

One day at a party, I met a guy (who happened to be black) who was quite obviously the coolest person in the room. He was well-spoken, passionate and did social justice work with teens using hip hop as a medium. But though I knew he was a kindred spirit, I stayed along the wall listening but not trusting that he would care to talk with me. But then he walked up to me and said, “Want to shoot hoops?” He and I played one-on-one and talked about activism for a couple hours. The next day I went to the store, bought a basketball, and joined a game at my neighborhood park. I now regularly play basketball with a wonderful group of people: black, white, young, old, male and female.

As a storyteller, I never know what reaction I’ll get from my stories. Especially with stories like these that have mature themes and concepts, I wasn’t sure what the campers would connect with. But when I had finished speaking, one camper immediately raised his hand and told the group about how Martin Luther King, Jr. would march and make speeches to bring people together. He said, “Martin Luther King was just one spark in the fire.” Elizabeth Eckford was another spark. As she grew older, Hazel Bryan became a spark. And that man at the party was a spark in my life.

My hope is that Peacebuilders Camp can shine light on many of those not-so-famous sparks in the work for peace, justice and human rights. And by hearing these stories, campers can more easily add their sparks to the fire.

We ended the evening around the fire by singing “We Shall Overcome.”

Below are more photos from the day.

Peacemakers of the Future!