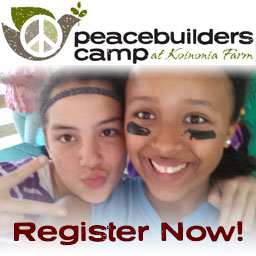 Friends of camp, please join us in celebrating our big news! We had such a big response from enthusiastic campers vying for a slot at camp this summer that we decided to take a leap of faith and expand camp to serve more youth. Instead of 12 campers per session, we’re adjusting our plans to make room for 18 campers each week. With the increased slots, we still have room for just a few more campers. So get those registrations in ASAP!

We’re already getting to know our campers and learning that they each have a story to tell and a reason they want to learn more about social justice. For the next few months, I’ll share a sampling of some of our campers’ answers from their registration forms.

Q. How did you first become interested in peace and justice issues? Give us an example of an issue that sparked your interest.

“My people in Burma did not have peace. There was war all the time.”

“I became interested in peace and justice because of stories of racism my Grandmother told me about..”

“I live near Ft. Benning, so I became interested in peace and justice issues when I saw soldiers go to war. They have bombs and nuclear weapons and guns and I don’t think that’s necessary. I think people should use their words and not weapons.”

“When I was teased for liking purple, taking ballet and violin, and having godparents who are gay and best friends who are Asian, Black, and Hindu, I decided I needed to spread world peace…My brothers and me were the only kids at Wedding Week when gays were allowed to get married in Alabama, and that made me sad.”

“I have always been interested in peace and justice issues ever since I knew what it was. I think all people should have the same rights. An issue that has most recently sparked my interest is gay rights.”

“I first became interested when I found out that over 50% of the government’s money goes to military.”

“When I heard about Trayvon Martin.”

Call for CITs! Do you know a 17-year-old interested in peace and justice?