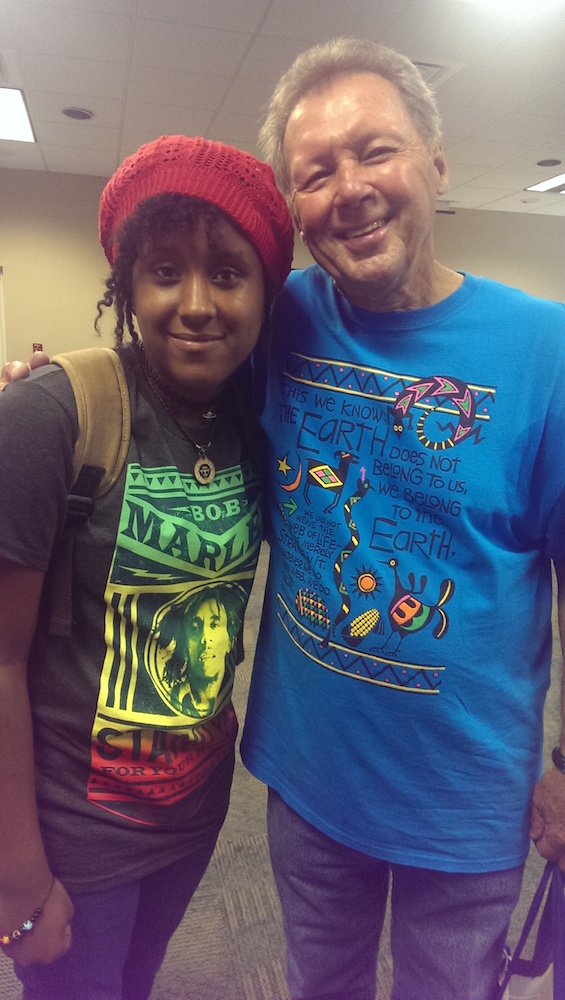 Each day at Peacebuilders Camp is focused on a different human right, and one right we often cover is the right to freedom of thought, conscience, and religion. This summer we decided to call on Father Roy Bourgeois to share about his adventures in following his conscience. Father Roy started School of the Americas Watch (SOAW) in 1990 and has spent many years working to close the training school. He’s also caught some flak in recent years for being an outspoken advocate for the ordination of women in the Catholic church.

When I left Father Roy a voicemail in the spring to ask him to meet with our campers in July, I wasn’t surprised to hear his apology for missing my call. He’d been in jail for civil disobedience and couldn’t call me back sooner. I knew Father Roy was the right person to talk with our campers about the importance of having the right to follow his conscience.

Father Roy started SOAW with the mission of closing down the infamous, taxpayer-funded School of the Americas at Fort Benning in Columbus, GA. The school trains Latin American military in questionable tactics, and countless atrocities in Latin America have been linked to soldiers who graduated from the SOA right here in Georgia. The watch group hosts an annual gathering every year in November. The weekend is a time to for activists to gather, strategize, and protest.

The focus of the gathering is a powerful Sunday morning vigil at the gates of Fort Benning in which mourners march solemnly with white crosses held high. Each cross bears the name of a person killed by an SOA graduate. As names and ages of the deceased in Latin America are read aloud, the crowd responds “Presente!” to signify that they are present with us and their witness gives us strength to continue the struggle. The funeral procession moves toward the gates of Ft. Benning, and everyone places their cross in the fence that encloses the military base.

Right now I’m remembering our visit with Father Roy this summer as my team and I prepare materials for our table at the vigil in a few weeks. We’ll be handing out camp flyers to activists gathered from many states and countries. I know it will be a very different experience from my first SOAW vigil ten years ago…

In October of 2005 I found myself going door to door in my college dorms looking for students interested in attending the SOAW vigil the next month — an eight-hour drive from campus. I didn’t have a car to get to the protest, wasn’t old enough to rent one, and didn’t have anywhere to stay once I got there. Yet there I was knocking on doors and solving logistical puzzles as best I could. By the end of the month I’d found two fellow first-years willing to commit to the road trip, secured school funding for the cost of the trip, found a loophole in the car rental laws, and reserved one of the few remaining campsites available near Columbus, GA the weekend of the 2005 vigil (one of the largest gatherings due to the boom in the peace movement during this time).

My scramble to attend the vigil had begun a few weeks earlier at a funeral in Kentucky where I sat grieving the passing of my grandfather, Bill Moore, who was being recognized by friends and family for a lifetime of bold service. He’d spent his life immersed in peace activism and racial reconciliation, all the while struggling as a southern Baptist pastor in a community that didn’t always accept his views.

During my last few years of high school, I wrote letters back and forth with him as I thought about my future, distanced myself from my religious upbringing, and wrestled with what I was learning in my “History of the Americas” class. His passing left our conversation hanging, and I often find myself wondering where he’d stand on today’s questions of activism, religion, and other issues. When I graduated from college and moved to Georgia, I felt myself coming full circle as I quickly got involved with Koinonia Farm, a community my grandfather passionately supported from its early days.

My grandfather was also passionate about the closing of the School of the Americas. Every November for years, he had boarded a bus full of nuns to hitch a ride from Kentucky to Georgia for the annual SOAW vigil. One speaker at his funeral took to the stage and declared that my grandfather was “Presente!” and encouraged everyone able to travel in attendance at the funeral to gather in Bill’s honor at the SOAW vigil the next month.

The funeral had coincided with my first college midterms, and I had to fly back to school quickly to get started on my make-up work. Soon, though, I knew I needed to be at the vigil and found myself knocking on dorm room doors looking for partners-in-protest. I marched in the vigil with two fellow students and my uncle, and it was a landmark weekend of many beginnings and connections. When I stuck my cross in the fence at the gates of Fort Benning, I felt my grandfather’s presence and felt grateful for the legacy of his work that I felt led to continue. 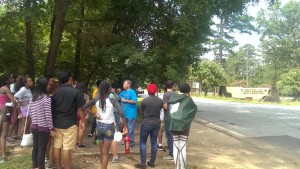 Fast forward 10 years, and I’m standing at the gates of Fort Benning with Father Roy and 20 young peacebuilders. It’s July, so there’s no protestors here — just the normal hum of cars and people moving around the base. Father Roy is painting a verbal picture for the campers — pointing up and down the street and describing what happens during the vigil, why some people choose to engage in civil disobedience and cross on to the base to get arrested. He takes the campers into the small apartment where he lives across from the gates, shows us photos of his work over the years, lets us sign our names on the “Shut the door on the SOA!” door in his living room. I look at the campers and see the wheels turning. 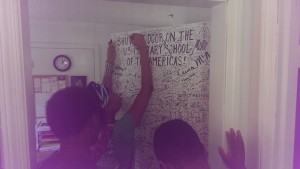 Father Roy’s stories make it clear that following his conscience has often led him on a path he had to walk alone, and that’s been true in my life as well. But I’ve been relieved to realize that many times following my conscience also means following in the footsteps of those who have come before me. Father Roy has been part of the struggle for many years, and I’m grateful he was able to share stories and answer questions for our campers as my grandfather did for me. I know someday I will see our Peacebuilders Camp graduates in leadership roles in the movement for peace and justice telling their own stories.

You can help in the movement to close the SOA. Join Peacebuilders Camp at the vigil Nov. 20-22 in Columbus, GA. Find out more here. 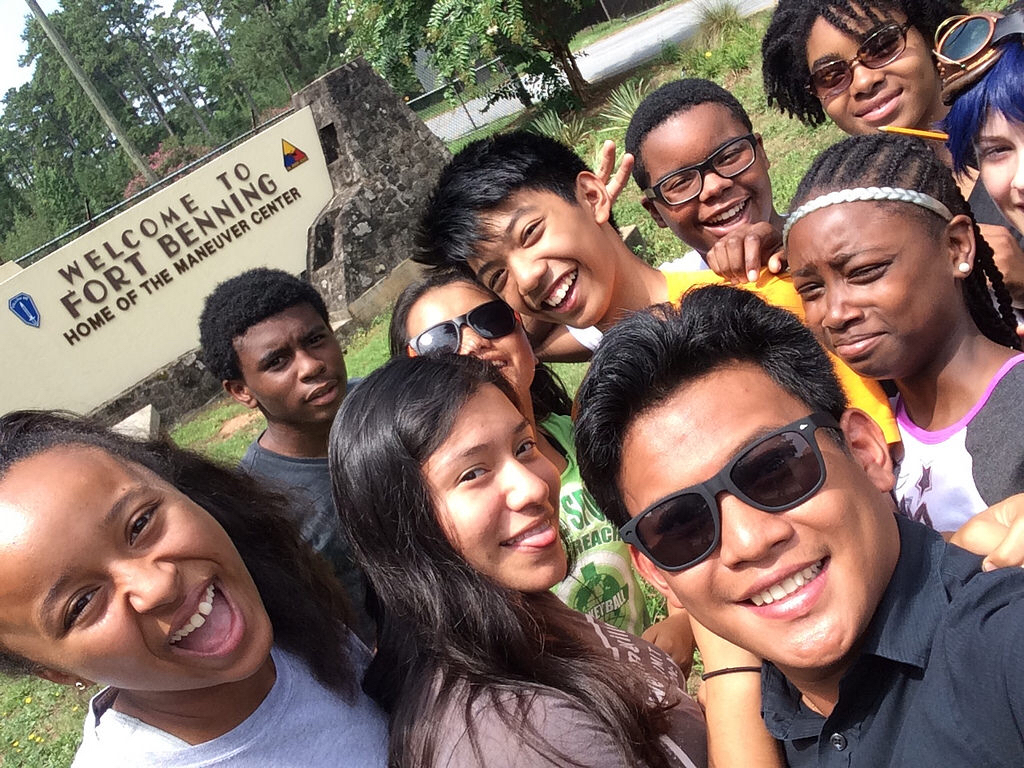 The long road to camp starts in January