Peacebuilders Camp 2017 is off to an exuberant start! This morning we welcomed twenty 11- and 12-year olds from many different places and backgrounds who quickly began the process of forming community. First on the schedule were ice-breaker games that helped the campers overcome their initial shyness with each other. In one game, campers and staff moved between different chairs which were labeled with phrases that described them, creating a web of yarn as they moved from place to place. In doing so, they visibly connected themselves with one another and had a chance to see what they had in common. 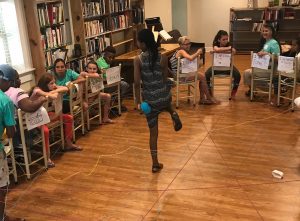 Divine navigates her way through a web of connections on her way to connect with a new friend.

Our focus for the day was Article 1 of the Universal Declaration of Human Rights: “We are all born free and equal in dignity and rights.” We had several opportunities during the day to think about what dignity means and how we show respect to one another. 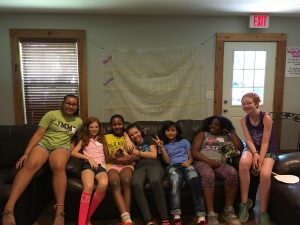 A couch full of friends!

An evening hay ride rounded out our first day at camp, with new friends laughing and joking together. After our closing circle, campers started to make notes on a large chart where they will be able to record each day what was significant to them, and write notes of encouragement to each other. They had plenty to say! By the time bedtime came around, it was hard to believe that we had started the day as strangers! 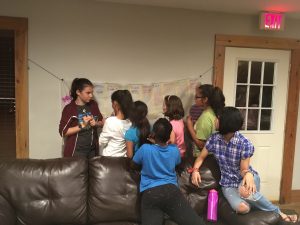 Making notes about the day’s insights and activities