Of the 30 articles in the Universal Declaration of Human Rights, several are pretty easy to understand. It doesn’t take a lot of insight to realize why rights to things like food, shelter, and healthcare made the list. This week at camp, though, we stretched the minds of our 11- and 12-year olds and asked them to consider why articles upholding the right to a nationality, the right to leisure, and the right to “a social and international order that makes all other rights possible” found their way into the UDHR. And we ended the week with another question to puzzle over: why was the penultimate article included: “Everyone has duties to the community in which alone the free and full development of (their) personality is possible,” and how is it related to the first article that says we have the right to be treated with dignity? Our campers took the time to ponder, and came up with some great observations about the connection between responsibility and dignity.

Friday’s focus on the right to an adequate social and world order took us to the home town of two of the heroes of this right, Jimmy and Rosalynn Carter. (We learned that we were there on the Carters’ 71st wedding anniversary, in fact!)  Campers visited both the boyhood farm, where Jimmy grew up and learned his first lessons about equality, dignity, and responsibility; and Plains High School, which is now a museum and the headquarters of the Jimmy Carter National Historic Site. It was easy to see how experiences in the Carters’ younger years shaped them into the peacemakers they are now. Campers learned how Jimmy Carter has helped to ensure a social order that upholds human rights through peace negotiations and through the work of the Carter Center, and how Rosalynn has helped to transform the social atmosphere so that there is more support for people with mental illnesses. 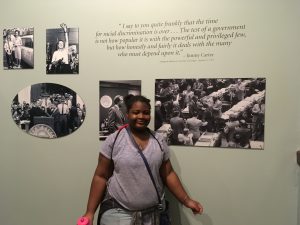 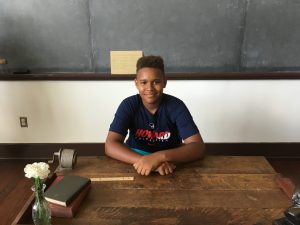 Areeb at the teacher’s desk at Plains High School 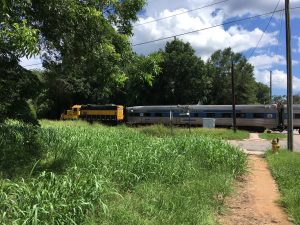 Campers returned to Americus by train! 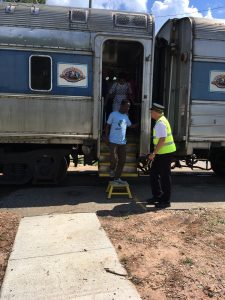 Saturday, the last day of camp, was the day to consider our responsibilities to the community. Staff members and some of our facilitators from the week shared with campers how they plan to take responsibility for building more peace in their communities in the upcoming months. Campers who chose to do so were then given help to determine their own goals or commitment for peacebuilding. Each goal was written out and included three suggestions for how other campers could be supportive. 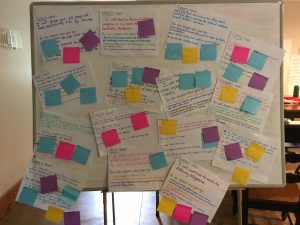 A few of our commitments and sticky-note pledges of support

Then all campers had the opportunity to use sticky notes to indicate what goals they would support, and how. In the end, 18  community-changing goals were shared, and pledges were made for over 60 supportive actions.

Here are just a few of the ways those of us in the Peacebuilders community intend to make a difference in the upcoming months. Would you care to join us?

Camper Zora will sell baked goods at her local farmers market to raise $150 by January to give to a homeless shelter. Others can support this goal by doing a similar action in their community. Zora also suggested that her fellow campers could help by sending her recipes or by emailing her to ask how she’s doing on her goal.

Camper Ida will ask three people to work with her this school year to help stop bullying in her school. She will suggest that when bullying occurs, she and her friends can talk with both parties to resolve the situation. Other young people can support this goal by organizing a similar group in their schools, or by asking trusted adults how to best confront bullying.

CIT Medinah will help build three houses with Habitat for Humanity before the end of the year. Others can support this goal by researching and volunteering for Habitat themselves.

Counselor Edgar will help farm workers in the U.S. get the right to fair wages. Others can support that goal by boycotting businesses like Wendy’s and Publix that sell products for which farm workers have not been paid fairly, or by writing letters of encouragement to farm workers who are fighting for fair wages. (Coalition of Immokalee Workers, P.O. Box 603, Immokalee, FL, 34143)

Co-director Mario will start a Roving Listeners program in his home town of Huntsville, Alabama. Others can support this goal by raising funds for recording devices to record interviews, creating flyers about the program, and sending thank-you notes to volunteers.

Miranda from Ultimate Peace, our facilitator on Tuesday, will place more focus on teaching the rules of ultimate Frisbee in her coaching this year, to promote peaceful, spirited ultimate Frisbee play. Others can support this goal by playing ultimate Frisbee with a focus on understanding the rules. When a foul is called, they can place themselves in their opponent’s shoes to understand their opinion, and then have a civilized, respectful conversation to reach a fair outcome.

Felicia from the STARS program, our facilitator on Wednesday, will help more youth with vision impairment learn about robotics. Others can support this goal by learning about robotics and sharing what they learn with others, or by choosing something they are knowledgeable or passionate about and teaching children with visual impairments or other barriers to learning.

As you can see, the responsibilities that we are taking on are as diverse as we are! How will you use your interests, skills, and talents to create peace where you are, and to support others who are doing so as well?