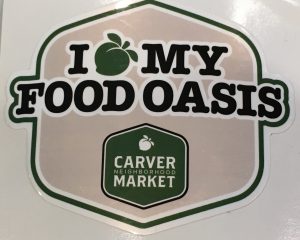 We were honored today to have Jeff Delp of Carver Market in South Atlanta join us for the afternoon. He described his neighborhood, just a mile south of Turner Field in Atlanta, as a place where a person has to spend three hours on public transportation to get to a major grocery store. He pointed out that in that amount of time, he can drive his own car to Chattanooga to go grocery shopping. Clearly, a problem exists for his neighbors, many of whom don’t own a car, and many of whom are on limited incomes. So a few years ago, Jeff and his colleagues at Focused Community Strategies set out to look for solutions.

Before Jeff shared what those solutions have been for South Atlanta, the campers played a game to simulate that problems that exist in food deserts like this South Atlanta neighborhood. Each camper was given a role to play. Here are some of them:

The campers’ task was to purchase enough food to keep their “families” from going hungry. They were told that the winner of the game would be the person who purchased the most nutritious food. They had five shopping options:

Most campers had 45 minutes to do their shopping. Some had to wait 10 minutes to start because their SNAP benefits hadn’t kicked in yet, and some had to finish early because of work or childcare duties. They had to strategize about where they could get the most nutritious food, given the amount of money they had to spend, how much time was required for travel, and how many units of food they could carry. A bus ran between the “neighborhood” and the large grocery, but the $5 fare for a round trip took a cut out of limited budgets. Walking was an option for some, but that mean being able to carry less food home than if they took the bus. The convenience store was close, but the food less nutritious. The farmers’ market was an attractive option to those who relied on SNAP benefits, because just like many real farmers’ markets, ours doubled those dollars.  Early on, shoppers made wise and calculated choices about price and nutrition. As time began to run out, the ice cream truck got more and more business.

Besides cash and/or SNAP credit, each camper was also given tokens at the beginning of the game representing dignity. If they shopped at the convenience store where they were treated rudely, they lost dignity tokens. With each transaction at the farmers’ market where they were welcomed and honored, they gained a token. SNAP customers lost dignity at the large grocery whereas other customers there gained dignity. A police officer roamed the area, suspicious of anyone walking between stores, and freely demanded dignity tokens.

There was plenty to discuss when everyone gathered back with their “purchases.” Many of the shoppers had not succeeded in procuring enough food for their families; the barriers were just too great. A few, though, through strategic planning and a lot of hustle not only obtained enough food, but quality food as well. Jeff was skillful in drawing parallels between the simulation and the realities of living in his neighborhood, and helped us think in new ways about a lot of other issues, too. We talked about how neighbors in our game or in real life could help each other by sharing the resources available to them, and about the cooperation that is needed to bring new resources to underserved areas. That cooperation and a lot of hard work has created an oasis in South Atlanta’s food desert. One point Jeff emphasized: it takes a long time to make real change. It takes a long time to understand the root of problems that keep people in poverty, and it takes sustained determination and creativity to find solutions to those problems. We are lucky that we got to learn today from someone with that kind of determination and creativity!

The freedom of conscience is central to peacebuilding