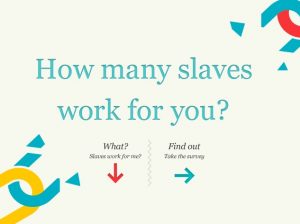 Thursday at Peacebuilders Camp was centered around one of the most stark and intense human rights: “No one should be held in slavery for any reason.” Unfortunately, human trafficking – a form of modern day slavery – is all too common in the world … and in the United States.

When slavery is mentioned, many people have an image of a southern plantation in 1850, not a young girl being forced into sex work or a young man whisked away from his home and forced to work on a chocolate farm, coffee plantation, or cattle ranch.

Modern-day slavery is way more pervasive than we would like to believe – and it affects all of us. Check your slavery footprint!

After learning some facts about modern slavery and human trafficking, our campers met with people who are working to stop this practice and provide comfort for survivors. Let me introduce them to you:

At the age of 15, Jessica Lamb was sexually abused by a “friend” of the family. This led to a downward spiral of self-harm and she started experimenting with drugs. After being told by a teacher she was a hopeless cause, Jessica dropped out of high school and ran away from home. She answered a job ad in a local paper and was lured in by a trafficker. She was branded (tattooed as property) and exploited for 5 months. She escaped in October 2003.

Today, Jessica is the founder of Atlanta Redemption Ink, whose mission is to restore dignity to survivors of exploitation, trauma, and abuse by taking marks of hurt and turning them into depictions and stories of hope and healing. ARI gives survivors an opportunity to have their “brand” replaced by a cover-up tattoo that symbolizes freedom, beauty, and redemption.

After hearing Jessica’s story and creating their own drawings of freedom, beauty, and redemption, our campers met John McKown of the organization Truckers Against Trafficking. John told our campers his story of having his eyes opened to the realities of human trafficking in truck stop parking lots. I invite you to watch his TED Talk here:

Hearing his story and learning more about human trafficking, camper Mia was inspired to seek ways to stand up against modern-day slavery. The day’s discussions were significant to her and made her think a lot about victims of trafficking. She wants to be more diligent and aware of when it might be happening in her community.

If you’d like to learn more, watch this video produced by Truckers Against Trafficking:

And a big thank you to the American Trucking Association and Truckers Against Trafficking for helping John visit Peacebuilders Camp!

Don’t be a bystander!

“I feel so powerful!”