The February 14, 2018 mass shooting at Marjory Stoneman Douglas High School in Parkland, Florida stunned and saddened our county. But in the midst of calls for thoughts and prayers, the surviving students stood up and took action.

Isabella Pfeiffer is a rising senior at Stoneman Douglas High. After surviving the shooting, she and some of her classmates decided to transform the tragedy into positive change. (Here is an article that features Isabella.) They started Students for Change, a 501(c)3 nonprofit that aims to empower students across the country to advocate for what they believe will make them safer in their schools and communities.

This kind of youth-led social action is exactly what we are trying to foster at Peacebuilders Camp. Activism does not have to rise only from tragedy, but instead can be spurred forward when regular people notice injustice. We hope to introduce our campers to models for leadership and give them a toolkit they can use for social change.

To this end, we invited Isabella to come to Session Three and share her story and experience with our campers.

Isabella sat with Peacebuilders campers and told her story of the shooting and afterward. She also shared some about the process of creating Students for Change. She encouraged campers to become involved in their own communities and advocate for their own safety. And she talked about the lack of funding for mental health resources at her school prior to the shooting. Isabella lifted up this problem as one that many schools around the nation face – and our campers agreed, asking many follow-up questions about that topic.

Camper Hannah felt especially connected to what Isabella shared. Hannah helped organize the Atlanta March for Our Lives (which grew from students’ activism following the Parkland tragedy) on March 24, 2018 and kept telling Isabella how great she was. Isabella repeatedly responded by saying how great Hannah was, and thanking her for stepping forward on this issue even though she was not personally affected by it. We all smiled, hearing them argue about which one of them was the most amazing. (We know both of them are! See their picture above.) 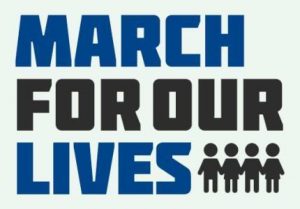 Hannah plans to keep in touch and hopefully attend a summit that Students for Change is organizing in DC this fall.

One spark can lead to another spark, and another, and another. This week, I’ll be sharing stories with you about ways our campers intend to continue their learning at camp with an ongoing project designed to increase peace, justice, and access to human rights in their home communities. Stay tuned!

Where do you stand on the right to a fair wage?

“I feel so powerful!”

What are You Waiting For?

Join us for Peacebuilders Evening Camp in Atlanta! We’re taking the excitement of Peacebuilders summer camp and bringing it closer to home for those in and around the metro Atlanta area. You’ll learn the basics of human rights and discover how you can work to make change in the Atlanta community. Get ready to make new friends, share your ideas, and meet inspiring people who are creating hope and standing up for justice! Let’s get started building peace in our world!