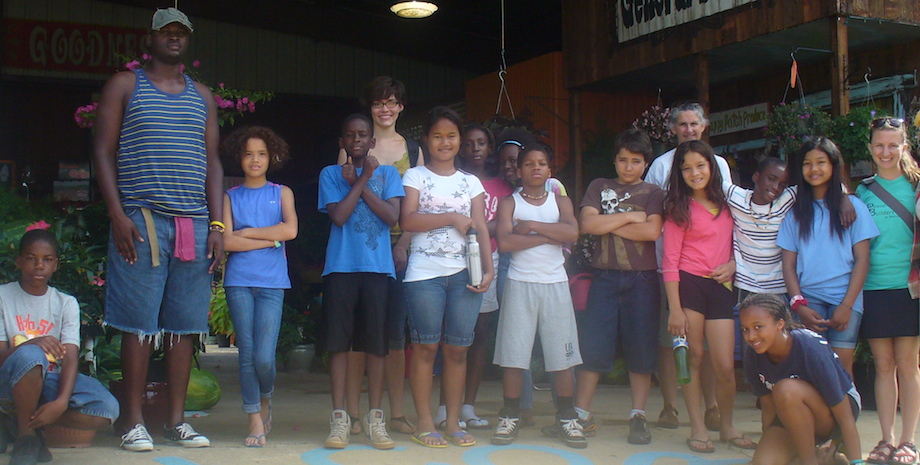 A Brief History of Peacebuilders Camp at Koinonia Farm

In the spring of 2009, Marilyn McGinnis, who was then teaching history at a small private school in Atlanta, led a group of six middle schoolers on an overnight field trip to Koinonia Farm in Americus. The goal was to learn about the farm’s role in the Civil Rights Movement and about the work of unsung heroes, both past and present, who have helped bring about about social change. The impact that this brief visit to Koinonia made on the students was impressive, and Marilyn began to consider how other youth could benefit from a similar experience. At the same time, she began to identify other places in the Americus vicinity that provided opportunities to teach and inspire youth, and the idea for a week-long camp focusing on human rights and peacemaking was born.

Marilyn teamed up with co-teacher Jonah McDonald, who had plenty of experience organizing and leading excursions for youth and adults, and together they established Peacebuilders Camp early in 2010. After a year and a half of planning, sixteen campers and two volunteer counselors joined Jonah and Marilyn in Americus in June of 2011 for the first Peacebuilders Camp. Together they spent a week immersed in the Universal Declaration of Human Rights, in Koinonia’s intentional community, in farm life, and in conversation with activists making a difference in the world. Interspersed with all the serious thinking and discussions was plenty of time for swimming, basketball, campfires, hayrides, water fights, storytelling, and crazy fun. Jonah and Marilyn realized what potential for transformation their program provided for youth from many different backgrounds, and committed themselves to developing a structure so that camp could continue for many more years.

That structure has continued to develop since the first year.  In 2012, Jonah and Marilyn that recognized the gifts that volunteer counselor Erica Schoon brought to the program and asked her to join the leadership team as the third co-director. As planning for Peacebuilders Camp 2013 began, the team decided to take a leap of faith and expand camp to two weeks, one week for each of two different age groups. Largely due to Erica’s tireless effort, those two weeks filled with eager campers. With paid counselors for the first time, camp was even more successful than in the past.

The camp curriculum, too, has continued to evolve.  Still based solidly on the UDHR, the specific rights highlighted and the venues visited vary from year to year. We have discovered more local people whom we rely on to facilitate various sessions, and we also are drawing talent from further afield, as in 2016 when Dwayne Szot joined us from Michigan to lead our campers in hosting a community art fair, in 2017 when glass artists from Project FIRE in Chicago helped us explore the right to participate in the arts, and in 2019 when rugby star Phaidra Knight brought her energy around inclusive sports to camp.

In 2016, Peacebuilders Camp was chosen as a partner in the Georgia Council for Developmental Disability’s program, Real Communities. Through this partnership, we have been able to include more and more campers who identify as having a disability. We have been particularly grateful for our relationship with the Atlanta Area School for the Deaf and for the young people they have sent to camp.

Also in 2016, Mario Burton took over Erica’s role as Program Director, and added his talents and expertise to our leadership team. Besides offering strong leadership to summer camp programming and guidance and support to our summer staff, Mario also helped put in place our first and second PeaceJam teams. Our oldest campers who form these teams spend part of their time at camp creating an ongoing peacemaking project to carry out in the months after camp. With mentoring from staff throughout these months, campers complete their project in time to present their work in April at the PeaceJam Southeast conference in Tallahassee, Florida. At the conference, our team has the opportunity to meet and network with passionate youth peacemakers from all over the Southeast. They also meet and learn from a Nobel Peace Prize laureate at the conference.

Now running three camp sessions each summer, Peacebuilders continues to grow and evolve. In 2019, we welcomed back 2016 counselor Quayneshia Smith to take over as Program Director. In 2020, we will pilot our first 2-week session with 12 campers for our PeaceJam team. Stay tuned for more information about this and other new developments as Peacebuilders Camp continues to adapt to provide innovative human rights education and to prepare tomorrow’s leaders to thoughtfully respond to the ever-changing challenges of their communities.

Each summer, a new journey awaits.  Come join us!

“Thanks for everything. You taught me so much. Your hospitality, kindness, and accepting helped me realize that there is hope for the world after all."
-Trevyn, 2014 camper

“I loved, loved Peacebuilders Camp! It is such a great camp for teens, it helped me a lot, I learned so many things and I am hoping to come back next year.” -Farzana, 2016 camper

"Thank you for another wonderful experience. Faith has not stopped talking about her week! We love hearing about her week and the new friends she made. You are making such a dynamic impact on our world! We cannot thank all of you enough!!"
- Kathy O’Hara-Rosa, parent